New Photoshoot + Interview of Dakota and Jamie for USA Today 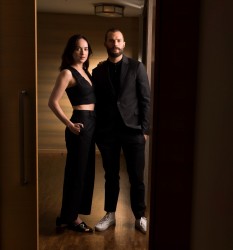 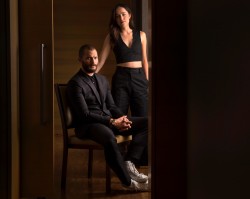 LOS ANGELES — A fully bearded Jamie Dornanstretches out a leg on top of a journalist’s knee. “Do you mind if I put my feet up?” he grins, as Dakota Johnson laughs next to him.

But sit with the movie's stars and one thing is clear: These two are in their sophomore year of Fifty Shades of Grey, and things are different.

"We have a friendship that will be a forever friendship, because we’ve gone through this thing together," explains Dornan, 34, who shot the franchise's last two installments, Fifty Shades Darker and Fifty Shades Freed, simultaneously with Johnson, 27, last year. "I know what Dakota’s going through the whole way through the movie and she knows what I’m going through. And nobody else does."

Fighting off a rainy, chilly day in a cozy sweater over her black crop top, Johnson nods. "We also spend so much time together that it’s quite easy to figure out if the other person is about to have a mental breakdown," she grins.

The easy vibe today marks a stark contrast to the Fifty Shades of Grey media tour in 2015, which was plagued with rumors that the two stars hated each other (not true, they told USA TODAY at the time) and that James feuded on set with director Sam Taylor-Johnson.

For its sequel, Darker found a new director in James Foley (House of Cards, Billions), who has his own take on the drama.

Johnson and Dornan "told me they barely knew each other when they started the first one. There was some friction in the making of that" film, he says. "But then they really bonded, interestingly enough, in the publicity tour around the world later, so when we started (Darker), they were already up to speed."

Today the pair can name each other's go-to food cravings (sushi for Johnson, Wendy's for Dornan) and joke about what one has taught the other. "Humor?" Johnson deadpans.

Upon taking the job, Foley immediately made several Fifty changes, first flying to London to bond with James and her screenwriter husband, Niall Leonard (by phone, the famous author calls Foley “incredibly collaborative, he’s a real professional"); asking Dornan to build a more muscular frame; and changing up the sets, including the infamous sex toy-filled Red Room.

For Dornan, "it’s nice to see Christian smile a little bit" in the sequel, he says. The character's ripped frame, he adds, was "probably the shape I was meant to be in in the first movie, but I was cast five weeks before we started filming, so I didn’t have time to do that."

In Darker, there's also a major uptick in kinky sex scenes, aided by less apprehensive leads. This time, “I definitely felt more comfortable with being assertive and opinionated about the way certain scenes should go,” Johnson says.

Laughter was an icebreaker on the set. “For instance, when (Johnson's) spanked, she giggles a little bit. It makes the whole thing OK,” says the director.

So at the end of those S&M-filled work days, is a glass of wine required to take the edge off?

Email ThisBlogThis!Share to TwitterShare to FacebookShare to Pinterest
Etiquetas: 2017, Photoshoot 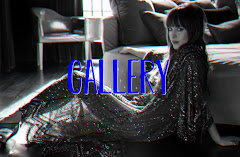 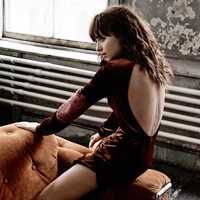